Meteorite through the roof

For the first time in several years a meteorite penetrated a roof in Europe. The nearly 700 grams large meteorite landed in the roof of a warehouse to Norway Group in Moss.

The meteorite was discovered last week when it emerged water leak at a warehouse to UNIL in Moss.

- It must have been incredible speed and power and had made holes in several layers of cardboard and insulation material. There were people from a company we hired to find the cause of the water leak that took a black stone in the roof structure, says press officer for Norway Group, Per Roskifte, to Aftenposten.no

- It was not the people in the warehouse when the meteorite hit, so no one has heard bang when it made the hole and “buklandet” in takkontruksjonen, says Roskifte.

- It has been a wonderful meteorite-summer. This is a very rare meteorite - called carbon meteorite, and it should get a nice place among our fellow at the museum, assures the director who is a geologist, very happy.

- This is an exceptional find! Astronomer Knut Jorgen Roed Odegaard at the Institute of Theoretical Astrophysics at the University of Oslo cheering.

- The meteorite is a so-called carbon - carbon meteorite. Previously, only five case of carbon meteorites observed on Earth, and the last occurred in Russia in 1937, says astronomer excited.

Fireball
The 676 gram heavy meteorite originating from the meteor that disintegrated over eastern area in mid-July.

14th July thundered a colossal fireball in the sky east of Norway. People over a large area could observe fireball while it caused powerful roar and thunder. The sounds were observed by an infrasound detector operated by NORSAR in Whitstable. Fireball was observed up to 300 kilometers away.

Big bang on the outhouse
Bus Drivers Ragnar Martinsen put in outhouse at the cabin when he heard rumbling.

- I thought it was the practice at Rygge Air Base. The explosion and rumbling in the skies above the cabin was horrible, he told Aftenposten 16 July. Then a few minutes later he left the toilet, he heard a hiss sound. Suddenly hit a small stone one corrugated iron sheet on the ground a few feet from him with a pang. Steinmeteoritten weighed a total of 35 grams. With the split in the hard collision. It’s extremely rare that someone sees that meteorites hit the ground. It is even rarer that something manmade get hit.

More discoveries
But this was only the beginning: Two days later, a second and much larger part found in a garden near Moss, about 4.6 km from the initial impact. This stone weighs 750 grams. The piece struck a plum tree and cut the tree branches before it penetrated seven centimeters into the lawn. The meteorite was found by Frode Johansen when his family came back from vacation and tried to turn the lawn. The stone was found in a place where the family’s three children often play.

The 676 heavy stone that went through the roof of Norway Group is currently one last greeting from space that are found.

World’s most famous meteorite hunter, Bob Haag, from Arizona, USA, has been twice in Norway to look for meteorite pieces in recent weeks.

- The pieces are the nicest I’ve seen from a meteorite ever, he said.

Haag travels the world in search of meteorites and has the world’s largest collection of rocks from outer space. 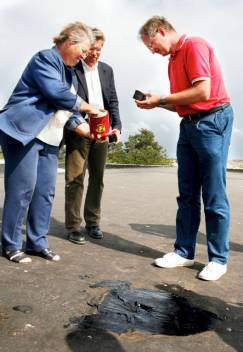 Frode Johansen showcases meteorite with his family in front of the tree where the branches broke and made holes in the ground while they were on vacation in July. (Photo: Morten Picture)