Just near Lake Titicaca in Peru.
Big impact of maybe +- 1. ton of H4 stone meteorite- HUGE mushroom impact cloud!
People knocked down and animals killed, terrified the countryside.
Blast removed 1000 tons of soil. Meteorite mostly destroyed… to dust!-
99% of the soft rock. Some remains in the crater - as mud now. Bob at the crater-now it’s a big tourist site! Locals with rewards for their discoveries-everybody is happy.
Cool people and place! 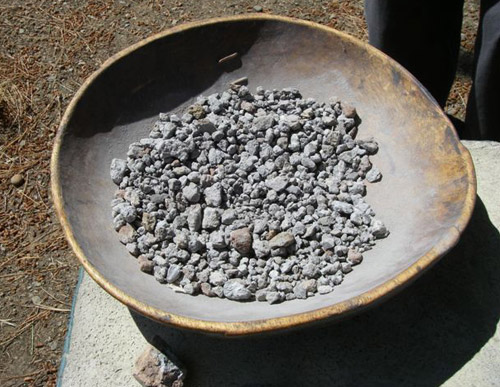 A bowl full of fragment recovered in right after the fall About 1500 grams-
mostly dust-about 35%-some nice fragments also This may be related to mabe*
(Haley comet) Hey folks-this is lots of work to get this believe me. Involves
several dozen people and many man days hunting. tiny crumbs….