Imagine thousands of square miles of pristine, undulating sand dunes towering 600 feet above the desert floor, dwarfing your Land Rover, threatening your puny human existence. These dunes are 300,000 years old. They have slipped and twisted over the desert for millennia before the first Egyptians built the smallest mud and wattle huts, let alone the pyramids. And for all that time the dunes have hidden secrets and treasures along their sinuous flanks, like precious stones sewn into the hems of twirling, gypsy scarves. Leave it to Robert Haag to lift the veils for a peek beneath.

We flew into Cairo and from there set out by road to Farafra, the last oasis. Beyond Farafra stretched something out of a movie set. We spent 12 days in the desert, 1000 kilometers beyond the last known road, navigating by satellite, like sailors on a great, sand sea. The dunes ran in straight lines for hundreds of miles -wave after wave of snaking lines of sand. In the valleys and troughs between, we found the meteorites.

Meteorites, naturally, were why I was there in the first place, thousands of miles from home and a thousand kilometers from the end of the middle of nowhere. As on many other trips to obscure and remote places of the globe, I was looking for anything forwarded from an outer-space address, but on this trip, we were specifically hunting Libyan desert glass, a particularly lovely variety of tektite. 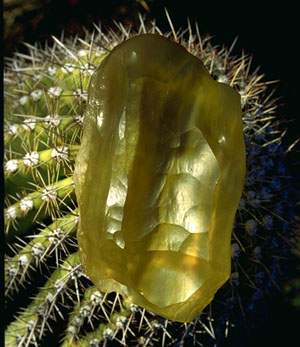 Libyan desert glass, 29 million years ago was probably formed when an asteroid or comet hit the surface of the earth like a huge atomic bomb, unleashing enough destructive force to not only liquefy the rocks, sand and dirt at ground zero, but to splash the molten, mixed material up into the wispy outer atmospheric regions. Perhaps some escaped Earth’s gravity altogether; the rest plummeted back in a rain of fire and molten glass. The crater marking the original impact site has not been discovered - no doubt it is under millions of pounds of sand. But wherever the original impact responsible for Libyan Desert Glass occurred, the results came to rest in the wilds of the Western Egyptian desert.

I had been invited on this expedition by my friend and fellow meteorite collector, Alain Canon and his son, Louis, who are French. Other members of the group included Michelle and Olivier, two free-lance writers, and Didier, a noted mineralogist and adventurer. Sam and Walli were our drivers and guides. Between them they’ve logged over a million miles of treacherous sand dune driving. And I mean treacherous. You’ve never seen anything like it. Out there, death sits on your shoulder like a vulture - one insignificant little accident and you’re just… dead. I found out quickly that surviving the desert is in the details. We were riding in two, 4-wheel drive turbo diesel trucks. All the fuel, all the water, all the food, all the spare parts we were possibly going to need, all had to come along with us, because if we got into trouble, we couldn’t just call MA to come and tow us into town. In fact, if you get in trouble out there, you’re probably in the worst trouble of your life. We were carrying 150 gallons of fuel per vehicle, and 150 gallons of water, and I didn’t think it would be enough. The one indispensable item was a really superb pair of sunglasses. Unfortunately, I went without mine for one hour once and suffered for days. The reflected radiation off the white talc desert and the light sand is incredibly intense. You would literally go blind in a few hours without eye protection.

Besides good sunglasses, I brought what I figured were the perfect shoes for sand dunes - light-weight hiking boots with high-relief, Vibram soles. Good traction on the sand, and all that. Wrong. The best possible shoes turned out to be either plain tennis shoes or cowboy boots with really smooth leather bottoms - anything that didn’t break the crust of the sand. Once you broke through the surface crust, you floundered around like a cow on roller skates. Naturally our mountain bikes were completely useless, since there was no sand hard enough to bike on and you exhausted all your energy in about a minute and a half trying.

As it was, we got the vehicles stuck every day. Sometimes we got stuck three or four times a day. We carried big sheets of aluminum poked full of holes to put under the tires to get out. Sometimes, when it was really bad, we might only go a few feet before we’d get stuck again. It all depended on the orientation of the sand grains. Sand going one way - hard as a parking lot. Sand going the other way? Wooft! Down you went to the axles. Again. Dig, push, all together.

Another interesting aspect of driving in almost white sand is that you can’t drive at noon. There are no shadows. Therefore there is no relief, no contrast and no depth perception. Everything is the same color. You might drive right off an eight-foot drop and never even see it. And that would be a bad thing.

There were plenty of non-cosmic surprises in the desert. One day we were zooming along  when someone yelled stop. We had just driven past multiple caches of ancient terra cotta jars, arranged in circles, about eight to ten pots per cache. All that could be seen of them without excavation was a series of black and rust-colored circles in the hard packed sand. pictures, made notes and shot the exact location of the caches using a GPS unit (ground positioning satellite) that measured latitude and longitude, for a report to Egyptian archeologists upon our return to civilization.

Another fun discovery was desert fulgerites. These bizarre artifacts are like “fossilized” lightning. Lightening, which is hotter than the surface of the sun, actually strikes the ground quite often and the desert is no exception. When this happens, a perfect record of the shape of the lightning is preserved in the melted sand or dirt, then it can be lifted or dug out. Generally these fulgerites look like petrified roots or perhaps the burrows of snakes, but of course are neither. We were able to collect several wonderful, branched specimens to bring home. Some are hollow, like flutes.

When we finally spotted the first specimen of Libyan desert glass we were somewhat unprepared. It was nearing sunset and the sunlight was streaming across the white sand at a low, oblique angle. Suddenly someone shouted and pointed. On the sand ahead of us was an eerie, glowing green light. It looked almost radioactive. When we got there, we found a big beautiful chunk of desert glass glowing in the sunset. We found many more in that fashion and also in the mornings when the sun was still low in the sky.

In all, even with the dangerous extremes of the desert to contend with, it was one of my favorite adventures. Not only did we actually find what we were looking for, but we found lots of things we weren’t looking for, and sometimes, that’s the best part. Friend- ship, excitement, the blood pounding in your ears as you scream down a sand embankment side- ways, wondering if the Land Rover is finally going to roll over, the fabulous panorama of the night heavens, like mirrored image - sparkling sand dunes in the sky -these are the things that make life as the Meteorite Man the best adventure imaginable!